Scientists from the University of Tennessee at Chattanooga will lead a team to create and test smarter intersections, where drivers will spend less time idling at red lights, and cars will know what speed to drive to clear every green light. “This project is a huge opportunity for us,” said […]

Scientists from the University of Tennessee at Chattanooga will lead a team to create and test smarter intersections, where drivers will spend less time idling at red lights, and cars will know what speed to drive to clear every green light.

“This project is a huge opportunity for us,” said Mina Sartipi, director and principal investigator at the university’s Center for Urban Informatics and Progress.

The Department of Energy awarded a $1.89 million grant to the collaboration with the University of Pittsburgh, Georgia Tech, Oak Ridge National Laboratory and the city of Chattanooga. The grant was one of just three awarded in this category in the nation, and the work could lead to less fuel consumption and safer roads, Sartipi said.

“This is the largest grant we have gotten,” said Sartipi, who has led the Center for Urban Informatics and Progress since it launched two years ago. “Our existing infrastructure, the MLK Smart Corridor, will be the cornerstone for this work, as it gives us a precedent for applied research — research with a real-world nuance.”

The existing Smart City ‘test bed’ along M.L. King Boulevard records everything that happens, from cars passing through intersections to pedestrian and cyclist patterns. The road is a rich source of data, and a good foundation for future work, Sartipi said.

The Smart City work is led through the center at UTC, but also involves the city of Chattanooga, Hamilton County, CO.LAB, the Enterprise Center, EPB and Erlanger Health System. EPB in particular had a role in making Chattanooga a site for this cutting-edge research, as the city’s high-speed internet infrastructure allows the center to process massive quantities of data.

This new work funded by the Department of Energy reflects the growing importance of connected and autonomous cars in increasing safety and reducing emissions, said Osama Osman, assistant professor in UTC’s Department of Civil and Chemical Engineering, who will also work on the project.

“They really are safer,” said Osman, who specializes in intelligent transportation systems and data analytics. “Technology sometimes causes some sort of fear, especially when there’s a huge change, but autonomous cars are coming, connected cars are coming.”

Through this kind of research, there will come a time when cars don’t stop at intersections but are guided through them by artificial intelligence, he said.

“We can ultimately have a connected vehicle travel through an entire corridor without stopping for a second,” Osman said. “These are all applications enabled by wireless communication.”

The pandemic has cut the amount of traffic on the roads by about 20% from this time last year, but those open roads have led to more accidents and fatalities as people drive faster, Osman said.

“During the pandemic, safety has been compromised significantly,” he said. “Safety is the number one priority in any work done in transportation research.”

The collaboration with the University of Pittsburgh, Georgia Tech, Oak Ridge National Laboratory and the city of Chattanooga means the groups can bring together the research they’ve all done in connected vehicles and infrastructure, using the testbed in Chattanooga for real-world development, Sartipi said.

“That was a major thing for us winning this, the fact that we can do these things on the testbed because the infrastructure already existed,” she said.

The work will happen in stages over about three years, including a phase when the researchers will test their theories in simulation environments at Oak Ridge. At every step, students at UTC and the other universities will support the work, Sartipi said.

“We have awesome students that are the forces behind this,” she said. “It’s such an integrated project, this has to be done altogether the whole time, so we all get together — including students.”

Donations pour in for Tarlac programmer who repairs computers for free

Sat Sep 26 , 2020
Mark Anthony Perez, 22, has been repairing computers for free to help students in Tarlac who will be using these for their online classes. The story of his generosity went viral, inspiring Manila-based computer store Gigahertz to donate defective laptops and computer memories. (Contributed) BAMBAN, TARLAC–A computer store in Manila […] 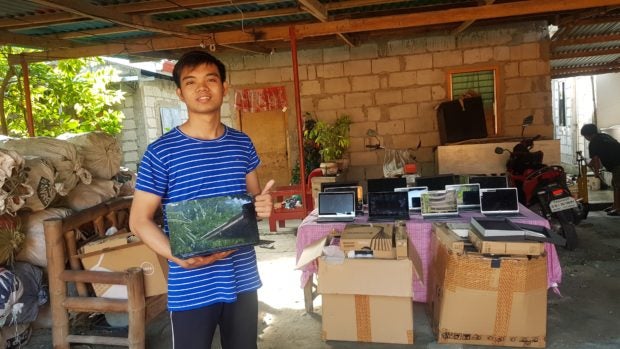